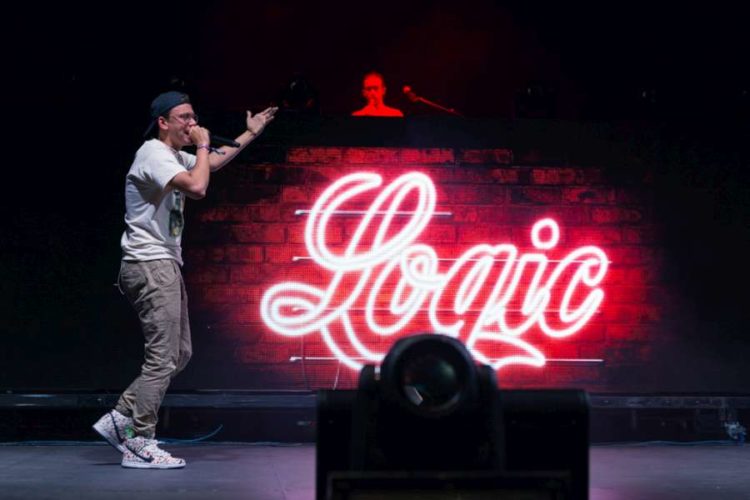 After all of the confetti has been swept up off the streets of downtown, after the spotlights have dimmed, the quiet of downtown is like a gratifying sigh—in two days, over 35 artists have performed for the city, leaving 40,000 people elated (and a little exhausted) after seeing their favorite artists. The huge success could be felt in the air, even minutes after Hardwell has finished his last song. 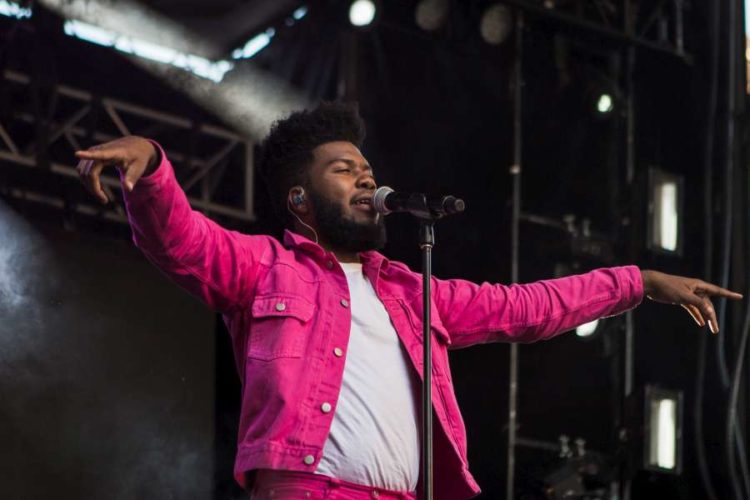 This is the proof that when you think big, you can achieve big—or something cliché like that. With any new idea being brought to the city, the doubts of people who think like a small town are loud. But founders of Splendid Sun Productions ignored those doubts and built up their dream of bringing a music festival to El Paso. Now in its seventh year, NDMF has received national recognition and attracts many fans and media from across the country, and even Mexico as well.

On the last day of the festival, I spoke to one of the founders, Zach Paul, in the headquarters for NDMF staff. In what used to be Walgreens downtown, the working space consisted of long banquet tables, chargers, boxes and a lot of empty space. A DJ set from the nearby stage could be faintly heard.  Zach showed no indication of being tired or overworked—or of being a brand-new parent. Other producers and colleagues weren’t even sure he would be present at the festival since having a kid only a few days before. 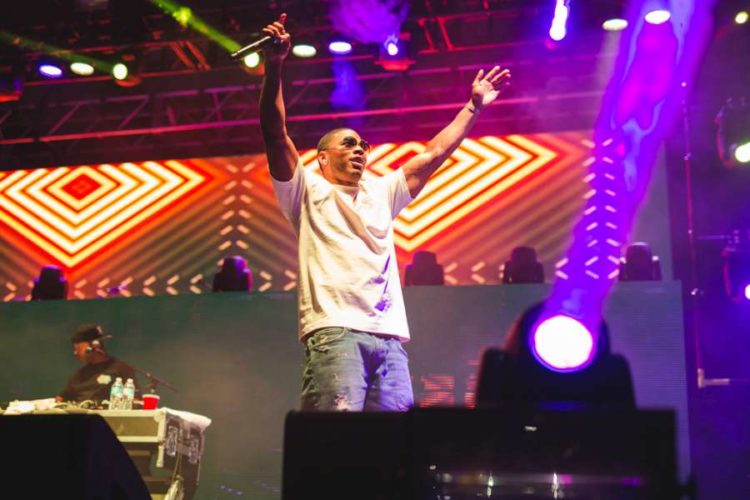 “We’re doing festivals. We’re getting better at producing festivals. The first couple of years of Neon, we didn’t really know what we were doing.  We’ve got a great team and that’s the most important part,” Zach tells me of how producing NDMF doesn’t necessarily get easier each year.When talks of creating a music festival first began, Zach was on TV with ESPN. His other two partners, Gina Martinez and Brian Chavez, were teaching and engineering for Samsung, respectfully.

For the first couple of years, they worked under the name of Splendid Sun Productions, bringing in ScoreMore, another production company, to help book hip-hop artists. Now, the “family” works together under the name of ScoreMore, producing other festivals like JMBLYA, a one-day festival in Dallas and Austin, and Mala Luna, their newest two-day festival that happens in San Antonio over the Halloween weekend. 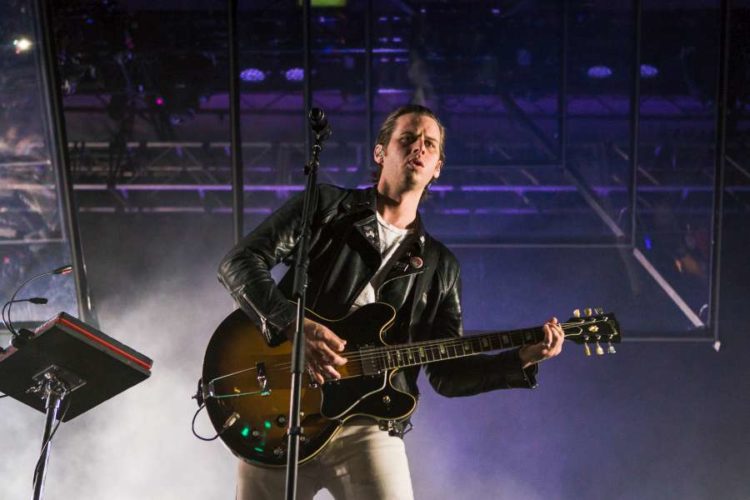 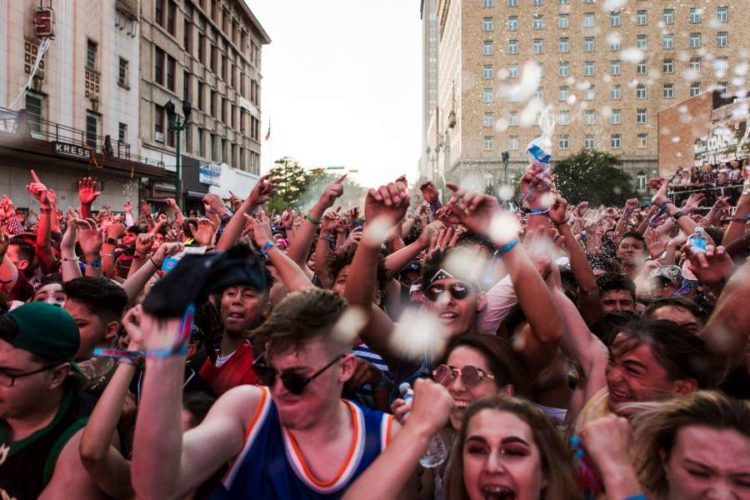 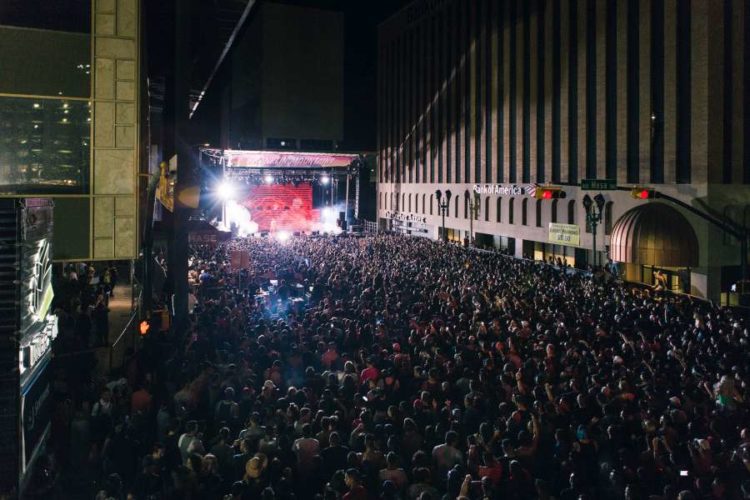 Since the festival first started, there has been a lot of changes. When I talk to Brian a few days after dust of the festival has settled he says, “The caliber of artists has definitely gotten better every year and we’ve increased the genres. We added hip-hop, we did EDM the first years, but now we’re able to bring [them in as headliners]. It’s also more interactive now with the activations and art.” Along with talent such as J. Balvin, Alesso and Mon Laferte, Neon also had a little skate park, local artists doing live art, pop up stores, and more.

The location of the festival is also a key part. “We thought about doing it in the desert,” Brian tells me. But being sandwiched between 100-year old architecture and being in the heart of the city made more sense. Brian also adds how it’s unique for the artists themselves to perform on a stage next to these great buildings. As a festival-goer, especially being from El Paso, the view is spectacular. Blue and purple lights bounce off of the Mills and Kress buildings, crowds squeeze in tight with their hands raised in the air, streamers emerge from stage canons and downtown transforms into this beautiful musical gathering.

On a daily basis, the food is what the city is known for, so producers did not ignore that. Food trucks brought in bacon-wrapped hot dogs topped with cheese and hot cheetos, tacos, custom burgers and of course, elote. Zach adds, “We don’t want to bring in food from Dallas or anywhere else. We want people to eat the food from here. So that’s something we always keep in mind so that its authentic.”

Though it’s a common impression that producing these big events and bringing in talent is just one big party, it’s a lot of work. “I think that’s the biggest misconception,” says Brian. “While everyone else is partying, we’re working.” As voices kept coming in over the walkie-talkie and people were walking in and out with laptops and camera equipment, the interview with Zach was kept on a time crunch.  I lastly ask Zach how far in advance they start planning for the festival, to which he quickly replays, “Oh, year round.” Brian echoes this later. “Once the festival ends, we do a recap and then immediately start [the booking process] for next year.”

So as the streets of downtown become functional again for cars to drive through and businesses open their doors, photos from NDMF are posted online to relive and anticipation for next year builds. All we can do is wait for the eighth year of El Paso’s music festival, when we can gather again for the love of all music and El Paso’s quirky food.