To Invite OR Not To Invite – Children at Your Wedding 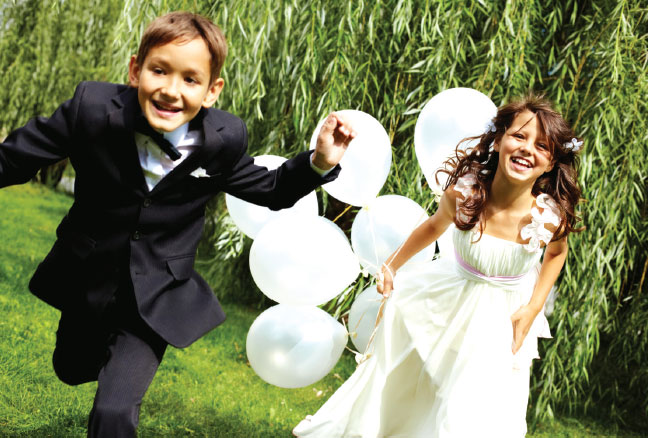 If you’re like me, deciding whether or not to invite kids to a wedding is simple! I don’t have kids, so why would I want them there? Done, no kids it is. Simple, right? Now on to bigger issues like cake flavors and toppers.

Wrong. Totally wrong. Not everyone is like me and most people I’ve talked to prefer children at family occasions. This situation is more complex than I ever imagined.

From what I’ve gathered, sometimes family and friends with children want to have them there for memories and pictures. 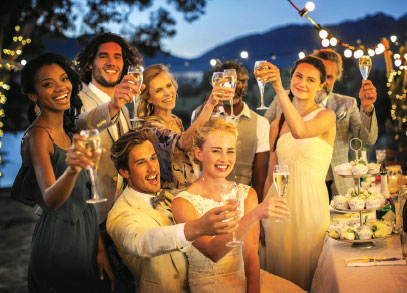 This is a whole new world to me, but I’m sort of getting it now. After I tried to imagine a wedding for myself, I had a mind-blowing moment when I realized that even I had little ones in the family that I would love present at my wedding. How could I have written them off so quickly? And what if I only wanted to invite those specific kids to my imaginary wedding? Do I place a big “No kids allowed (Except for the following:)” sign at the entrance of my party?

Because there is proper etiquette to all situations in life, here are the polite ways to invite, ban or partially ban children from your wedding. 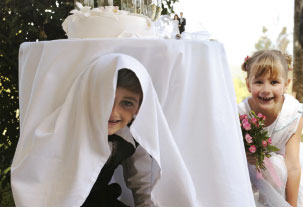 There are major reasons why people love having children at a wedding. Some say they add a touch of magic, a sort of youthful blessing to the newly married. Not to mention the spontaneity of children. There are many belly laughs that could be missed if children are not involved.

If you are only allowing new babies, some children (such as the ring bearer and flower girl), or children over a specific age, be sure to mention it clearly on the invitation. It may seem a bit specific, but people unaware of these exceptions may be upset seeing other children in attendance.

Another important thing to consider when inviting children is where to put them. Do you want a separate kids area for them to play in? Some weddings even have their own babysitters to watch the children as the parents have fun. Decide, announce and prepare for the children in attendance. Don’t forget to have children’s options during dinner also. 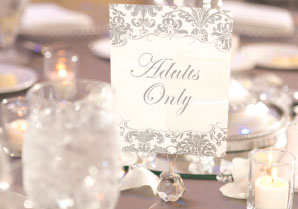 Okay, so you’ve decided that children are off the guest list of your formal wedding. I’ve read so many wedding stories that say the same thing: children sleep through most of the festivities anyway! When not inviting children, it could also be a great excuse for parents to have a night out to party. Not to mention, the amount of money saved by having adult-only weddings.

Keep in mind though, that some people you were hoping would attend may not be able to if they can’t afford childcare for the night or prefer not to leave their children. The decision is yours, but make sure that it is worth it for you not to have the attendance of a few friends and family members.

With all things considered, let’s move on to the etiquette of the invite. Proper etiquette on how to politely ban children is widely debated throughout the Internet. Some say it is impolite to write it on the wedding invitation and better saved for a more casual announcement, like on the event web page. Some say laying it all out there on the invitation is the best and only way to prevent any confusion or (gasp), accidental kid attendance. The horror. Others find sneakier ways of going about it, like sending a two person-only guest pass in their invitation or allowing a two person click option on the online RSVP. Clever, clever.

Any way you decide to go about it, know that it is your decision on who you choose to attend your special day. Don’t let anyone make you think otherwise.

As the bride and groom, you have the last word on your guest list. If there are any disputes with a friend or family member over the issue, let them know that it was a thought-out decision, made between you and your fiancé and you hope they respect your wishes. That is all you can do and it should be enough of a reason for anyone who cares about you. If not, we can’t say, “off with their heads,” but we can definitely say, “off of the list!”