Like most, I’m a hopeless romantic and utterly obsessed with proposals. So here are my top four best TV proposals that will surely tug at your heart, make you laugh through your tears and make you dream about your own proposal.

4 – Robin and Barney “How I Met Your Mother” 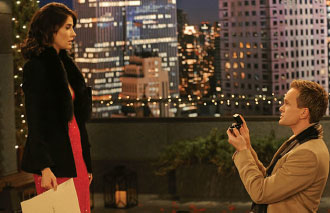 In order to win Robin, Barney, the creative womanizer, drafts up one last play in his playbook: “The Robin.” It explains all his strange behavior, including dating Robin’s nemesis, Patrice. Turns out, it was all a ruse to make Robin jealous and win her back. When Robin goes to the rooftop where Barney is supposed to propose to Patrice, she finds out it was set up for her all along. Really romantic, really twisted, or a little bit of both, the proposal suited Barney and you can’t help but be impressed by all the work he put in. 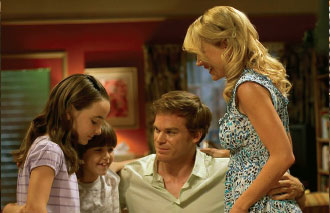 Your favorite serial killer is getting married. Throughout the seasons we’ve seen Dexter rarely expose any vulnerability as he fights with his darkness and his urges to be normal. But for one of the first times we see him expose that rare vulnerability. Dexter not only proposes to his pregnant girlfriend Rita, but also her two young kids. The serial killer with a heart, confesses that he has always wanted to go out for banana splits, replant the lemon tree that keeps dying, and never wants to miss a pizza night. With tears in her eyes, (and ours) Rita says yes. 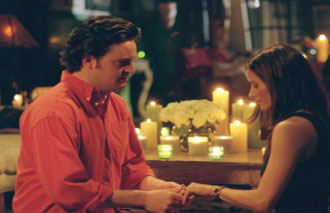 After getting over his commitment issues, Chandler is ready to propose to Monica. After his first proposal gets interrupted, Monica sets the scene for the second proposal. Filling their apartment with candles, she tries her best to propose herself, but doesn’t get far before she gets too emotional. You can’t help but get a little emotional too as the moment builds up. Chandler then steps in and tells Monica that she makes him happier than he ever thought he would be, and that he wants to spend the rest of his life making her feel the same way. No matter how many times you’ve seen this, tears will surely swell up again and again. 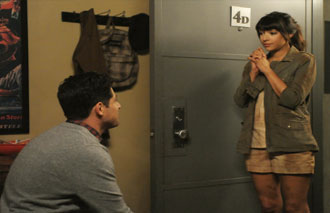 My favorite TV proposal. After losing Cece twice, Schmidt thinks he’s finally ready to move on for good. After donating a box of Cece’s stuff, and soon regretting it, Schmidt pays $500 to get back a $5 bill in the box. When Schmidt is preparing to leave to find Cece (who is climbing a mountain) he opens up the door to find her there. Schmidt begins to recall the first time he and Cece were alone, when he added $5 to the Douche Bag Jar for saying, “Girl, Imma marry you.” He then says that he has known since the minute he met her that he wanted to marry her, he shows her the same $5 dollar bill, gets down one knee and asks, “Girl, will you marry me?” I’ve seen this episode at least 50 times, but my heart melts every single time.