A “Mish-Mash” of Worldly Design and Functional Beauty 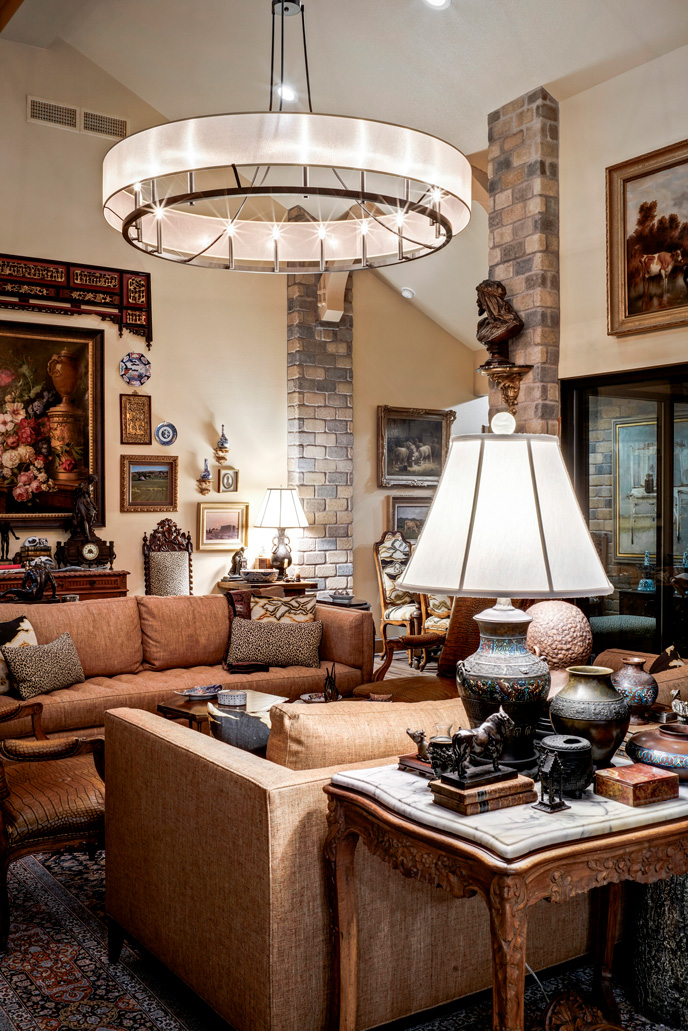 Eclectic as it is remarkable, the home built by Ross Landers, noteworthy interior designer for the Sun City and beyond, proves that beauty and function can be artfully combined in any living space. In fact, the 35-year decorator’s craft is characterized by a well-honed science of color, texture and design—the home he calls his own best exemplifies this amazing talent. Built in May of 2018, Ross explains that the home was once an old SAE fraternity house for the nearby UTEP chapter. In fact, the house sits on what was once a volleyball court used for the fraternity’s enjoyment. Today, the home touts a sleek, contemporary design that is beautifully enhanced with captivating period pieces and worldly relics. 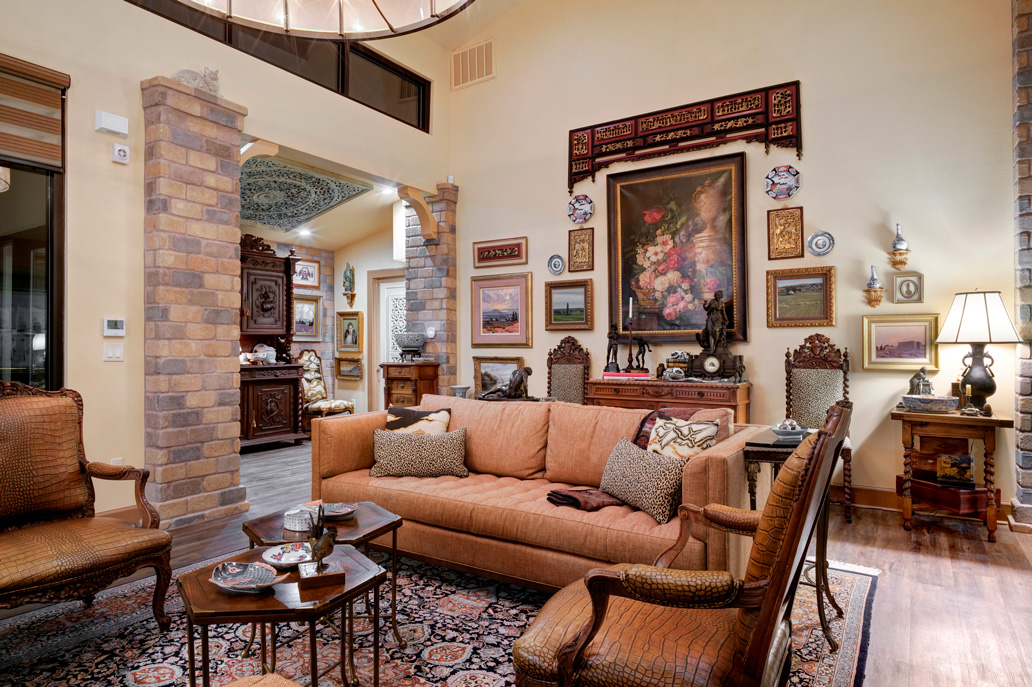 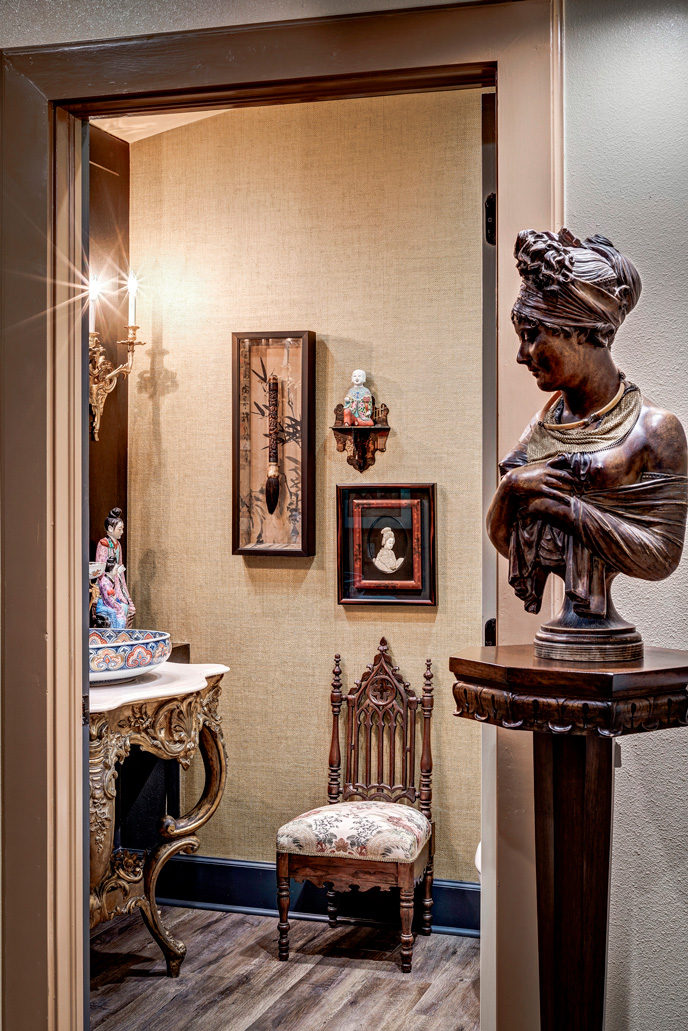 On entry, following an exquisite foyer, is an open concept that defines a living area that extends from kitchen to formal dining room. The living area, which Ross refers to as the “great room,” is a collage of artwork and décor described as a “mish-mash” of contemporary and period pieces, and is the area of the home where most entertaining is done. In this room, one finds the elaborate collection of Kutani Geishas, which is definitely an eye-catcher and just one aspect of the room’s intricate décor. Outside, the patios in the front and rear of the home are separated from its interior with complete floor to ceiling windows that lend to the fluidity of the space. In the evening, the walls are said “to disappear” and become one with the space when the evening lights permeate into the home. As Ross explains, “The reasoning for the patios is to create inside/outside expansion for a very small space.” Throughout this continuity, the entire area commands itself as a focal point from the impressive array of interesting pieces spanning various eras, and all thoughtfully placed. The artwork displayed is gathered from Ross’s travels in the country and abroad, and span international trade markets to estate sales, to even the simplest garage sale. A self-proclaimed “repo,” he has an impeccable eye for gathering items that will eventually make their debut in the home and says he tucks away his artful findings for just the right moment. 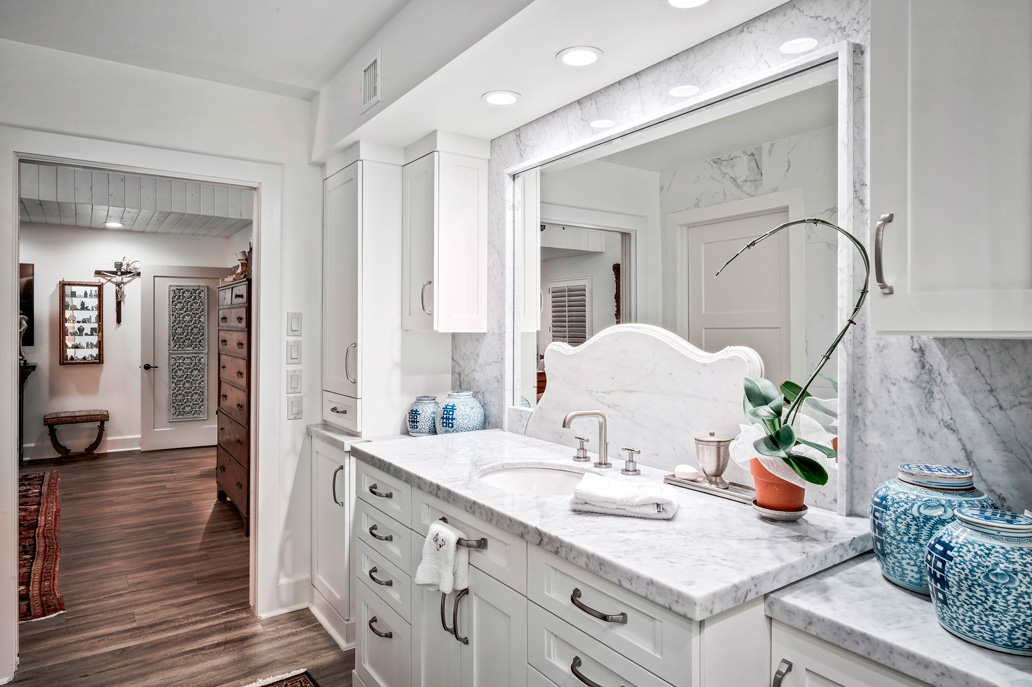 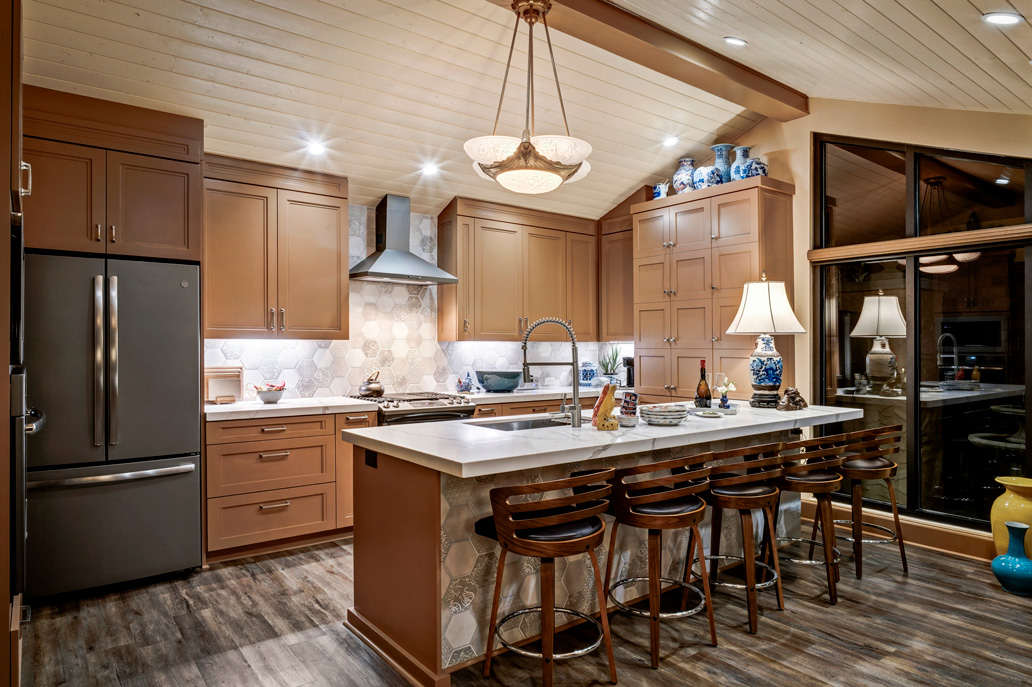 The patio in the rear of the home features a large, stunning bronze torchière that Ross describes as an “Egyptian revival,” and which stands prominently in the space while overlooking yet another beautifully-carved, cherub statute. Back inside, the awe-inspiring motif of the lavish dining area is comprised of artwork from all over, including that of local artists. The room is also accented by medieval corbels that are situated between the ceiling and the walls, giving the impression of reinforcing the structural beams on either side. Adjacent to the dining room lies the only bedroom in the home and reveals, according to Ross, a once-hidden area of the home that previously housed a maintenance room. The undiscovered area is now exposed and hovers above as a very quaint and thoughtfully utilized loft space. Eventually, Ross plans to extend the area back to fully open the space and, of course, to unleash the decorating opportunities therein. Among others, the bedroom is adorned with artwork and statues from a colonial Mexican period, which Ross says he appreciates for “their ability to survive” more than anything. Not surprisingly, he came to El Paso for “the border and the culture,” and has clearly replicated his admiration for our city’s rich history through this particular collection. Finally, beyond the bedroom is a modern bath that demonstrates Ross’s uncanny talent for blending concepts. Here the lines are sleek, and the stonework is modern in color and texture, and could easily be out of a contemporary art magazine. 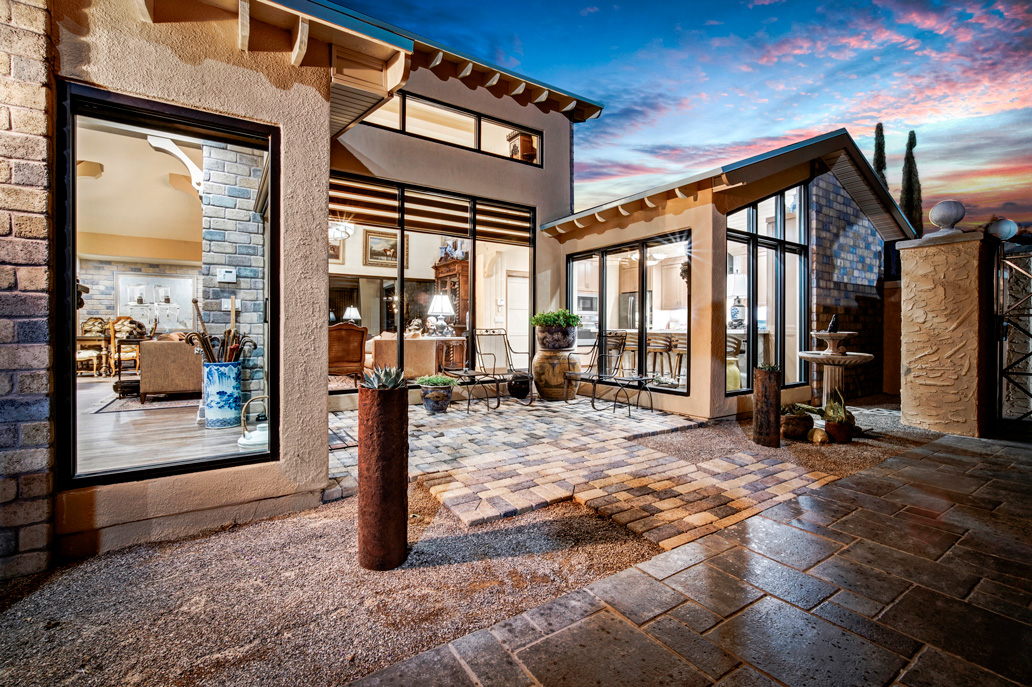 Circling back around the home is a half bath on the opposite side, which Ross refers to as the powder room. The room is adorned with an exquisite vanity from the Commode period of early 18th century France. On top sits what was once a Chinese Imari-era noodle bowl, now repurposed as the vanity’s basin. Adorning the room are Chinese statues and most notably, a large calligraphy brush, which Ross framed with an original Chinese scroll as the backdrop for this magnificent implement. The dazzling stained glass window complements the room beautifully and is another one of Ross’s estate sale finds. Adjacent to the powder room and back in the foyer is a delicately carved, wooden cabinet, which houses more of the exquisite Chinese statues that the designer has collected and which hold a captivating theme throughout the home. Circling back to the kitchen, one finds modern cabinetry that fuses function and design, and showcases black stainless-steel appliances for an uncommon touch. The room is accented beautifully by a large column and another of Ross’s alluring finds. All in all, this home is in and of itself a work of art that showcases the hard-to-come by talents of a local interior designer and equates to what is, truly, a hidden gem. 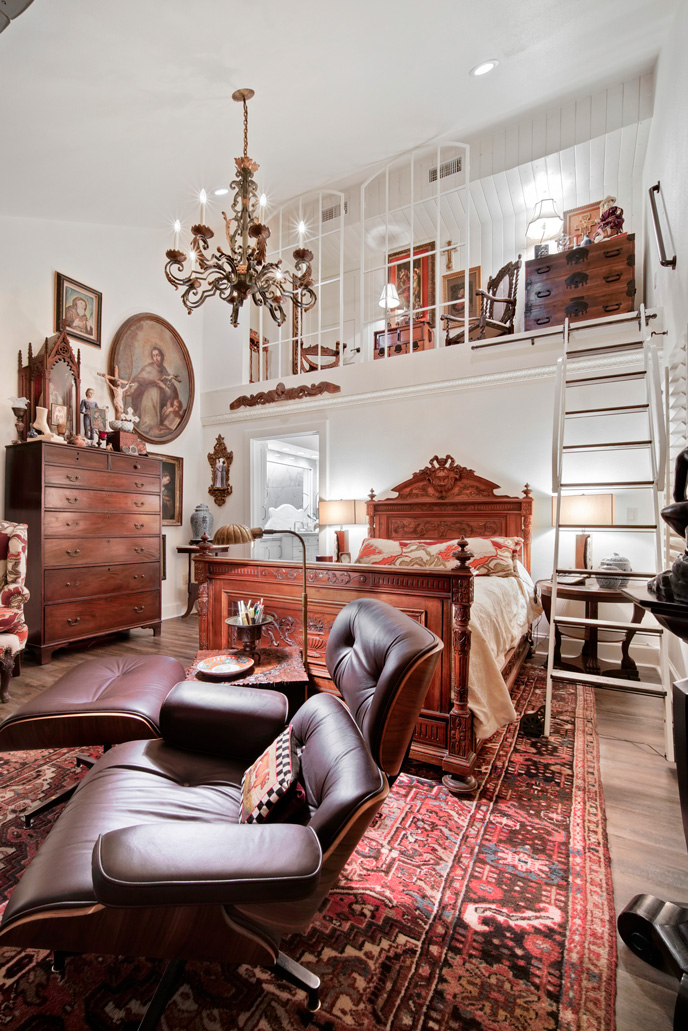