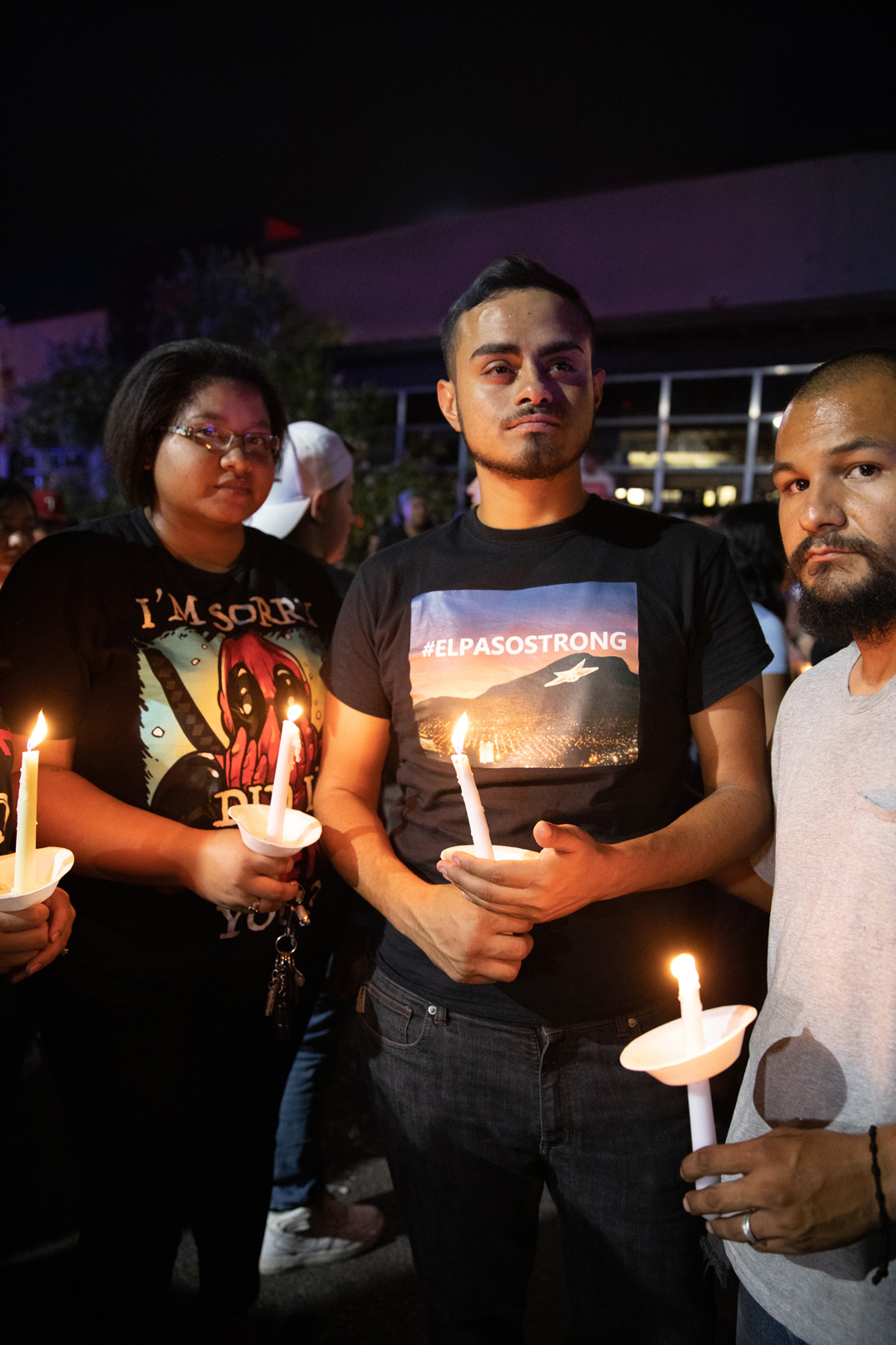 I live in the beautiful city of El Paso, Texas.

El Paso is one of the safest cities in the United States. In fact, more people were killed here in a single act of violence than in all of 2018. On Saturday, August 3, 2019, we experienced a senseless act of domestic terrorism because of who we are—a bi-national, largely Hispanic. We are a resilient, caring and loving community. This attack is not going to change that.

Here’s what I know about us: El Paso knows how to rise and we know how to love.

I take an odd solace in knowing that this killer is not from our community, because I know that the community I live in does not breed this type of hatred. It’s quite the opposite. When thousands of immigrants migrated into our community, we came together with donations and manpower in order to feed them and take care of their most basic needs. We recognize hunger and suffering when we see it and we don’t stand by without action. It’s simply not what El Paso and the border community does. 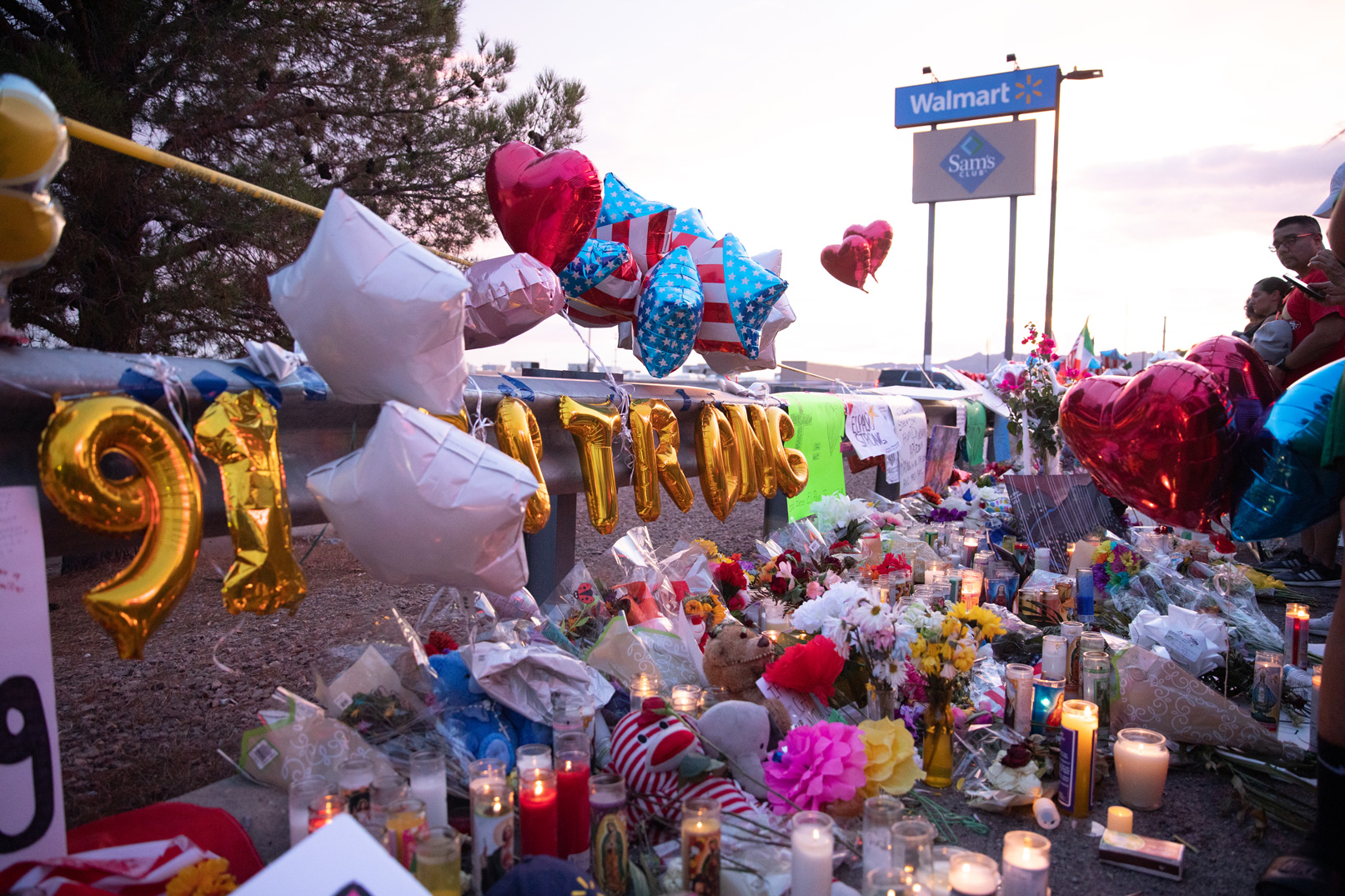 This killer drove ten hours across Texas in an attempt to scare us and divide us. That’s never going to happen. As soon as we became aware of the incident, we jumped into action — our blood banks immediately had lines out the door with El Pasoans braving the heat to donate blood for victims, volunteers showed up to feed and hydrate survivors, families who were waiting to hear the fate of their loved ones, first responders and members of the media. We even had folks feeding those who were waiting in line to donate blood. Two charitable funds were immediately set up and they continue to generate donations for victims and their families. Our local print shops united to make “El Paso Strong” shirts to benefit victims; the shirts were so popular that they raised $50k in a matter of days. To date they have raised over $175,000.

This community is doing what we can to make sure they are taken care of…and that’s just the tip of the iceberg. The efforts are too many to list here but rest assured that they’re happening and everyone is doing what they can for the love of El Paso. 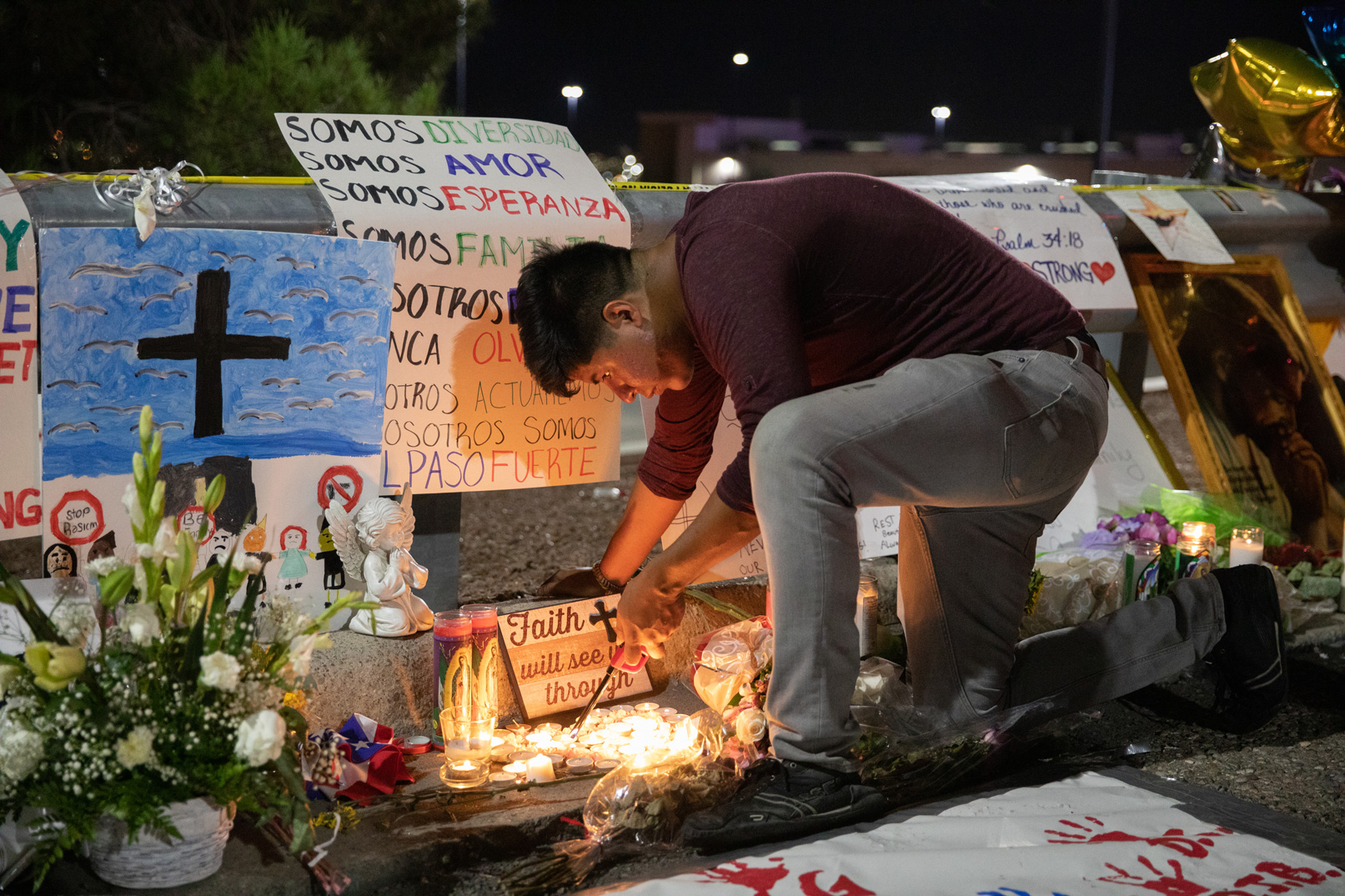 I struggle to find the right words to express what it feels like when your community is the victim of domestic terrorism. For me, it was a real possibility that my parents could have been one of the 22 left for dead. That particular store is their go-to for anything from daily household needs to car care. My mother’s Saturday morning routine begins with a trip to that Wal-Mart and luckily, that Saturday morning she was safe. Those minutes while we waited for her to respond were the longest minutes of my life and I sat there staring at my phone with a sunken, sick to my stomach feeling until she checked in and said she was safe. 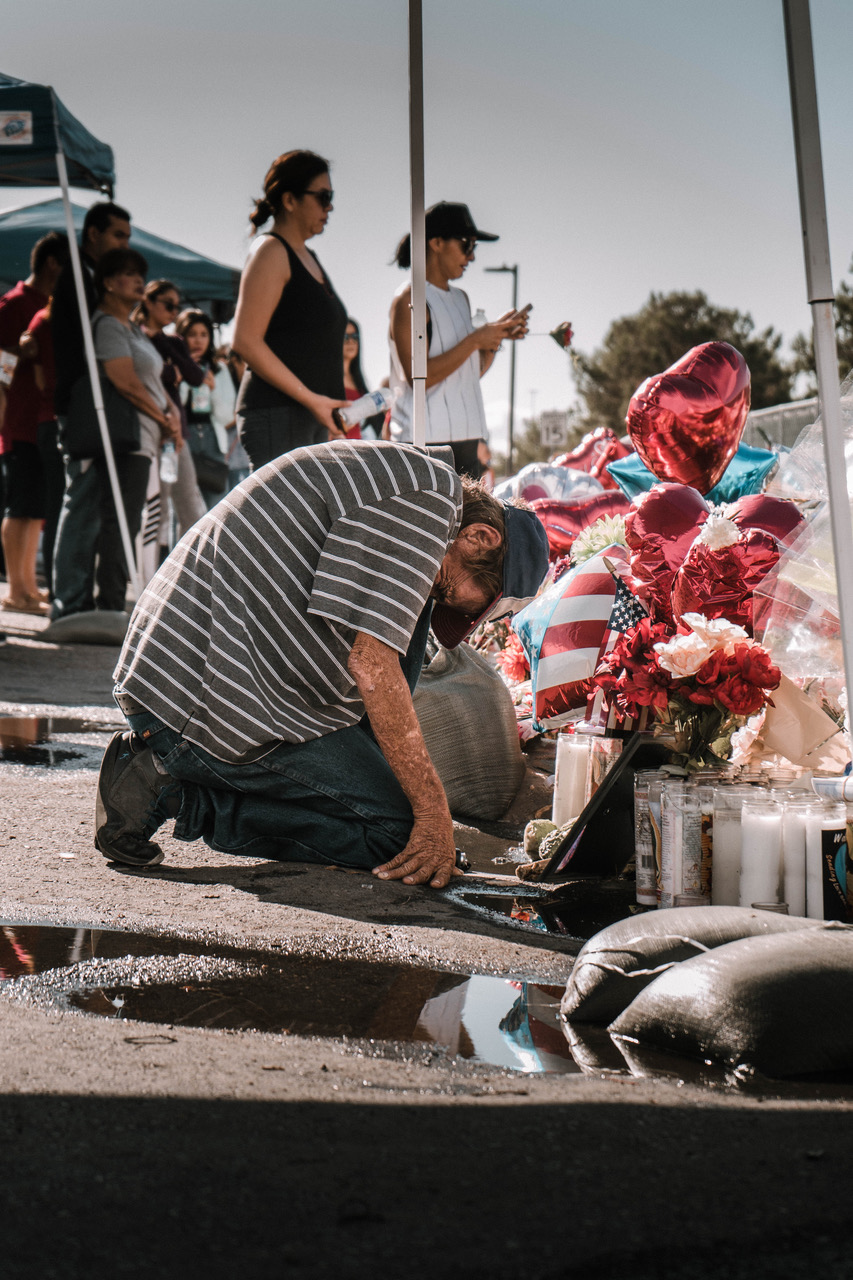 Ironically, she was shopping in our sister city of Ciudad Juárez, Mexico, just like many of our Mexican neighbors were shopping at Wal-Mart that day. Others aren’t so lucky. They have to deal with deep sorrow and the harsh reality that their loved ones are dead at the hands of hate. 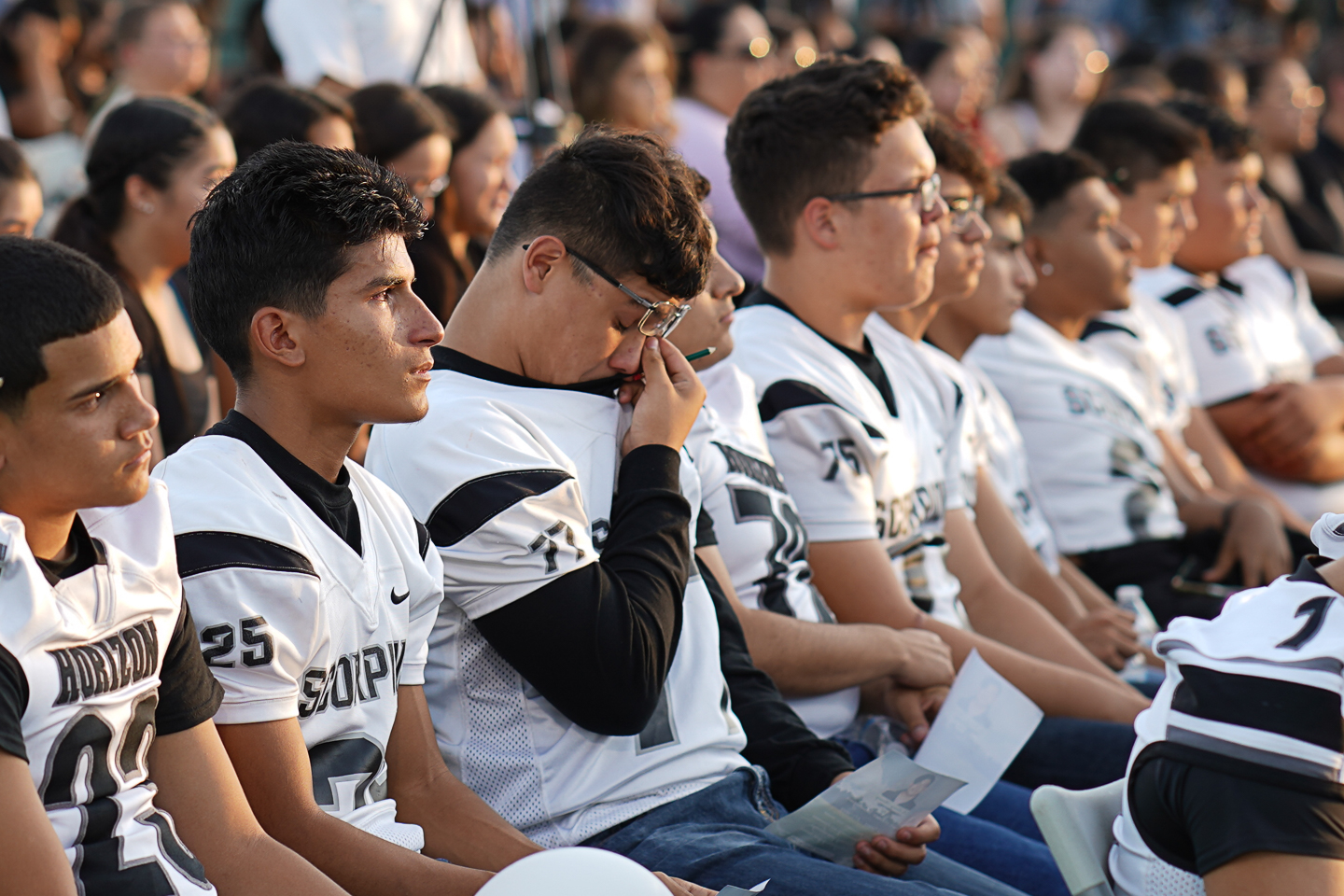 Horizon High School held a vigil for Javier Rodriguez, the youngest victim of the Walmart shooting.

My father, who expresses himself through music, sent me a video that night in which he recorded his own message of love in the form of John Lennon’s “Imagine.” He asked me to share it on Facebook and I did, and it made others feel good. He may not be the best singer, but like many other El Pasoans, he gave what he could in a time of crisis. Tokens of love like this are everywhere. My dad wasn’t the only person to record a song for El Paso, so many other local artists did the same and it’s so beautiful to see them process this event they way they know how—through their art. 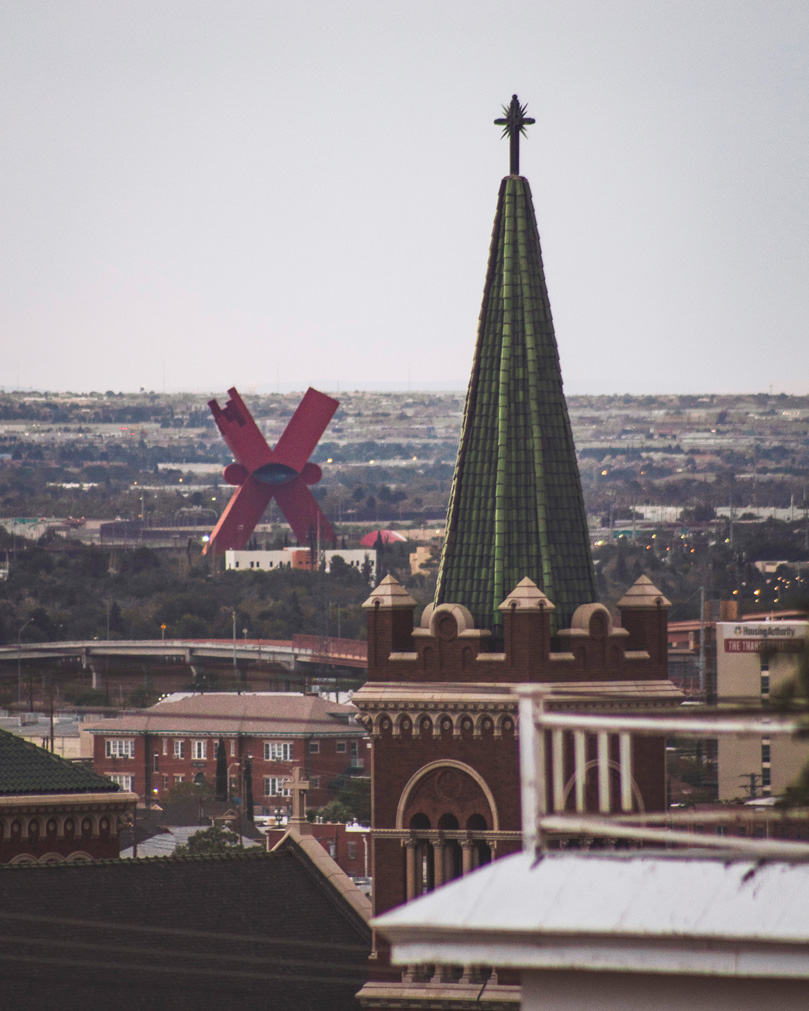 A view of our sister cities, El Paso and Cuidad Juárez. (Photo by: Philip Lara)

Our community has come together more than any time before. I say this and yet my friend and I just wondered out loud to each other, “Do all cities that go through a mass shooting react like this?” It’s sad to think that maybe there’s a template out there for how to overcome a mass shooting, or to even fathom the thought that others have been in this situation before us. One thing we know is that THIS.IS.DIFFERENT.

At press time, it’s been a little over two weeks since an act of senseless violence changed my city. I still don’t have the wherewithal to visit the site of the shooting, where a makeshift memorial has grown into a place of gathering, grieving and hope. A place where strangers come together to console each other and mourn the loss of 22 lives and the loss of our city’s innocence. 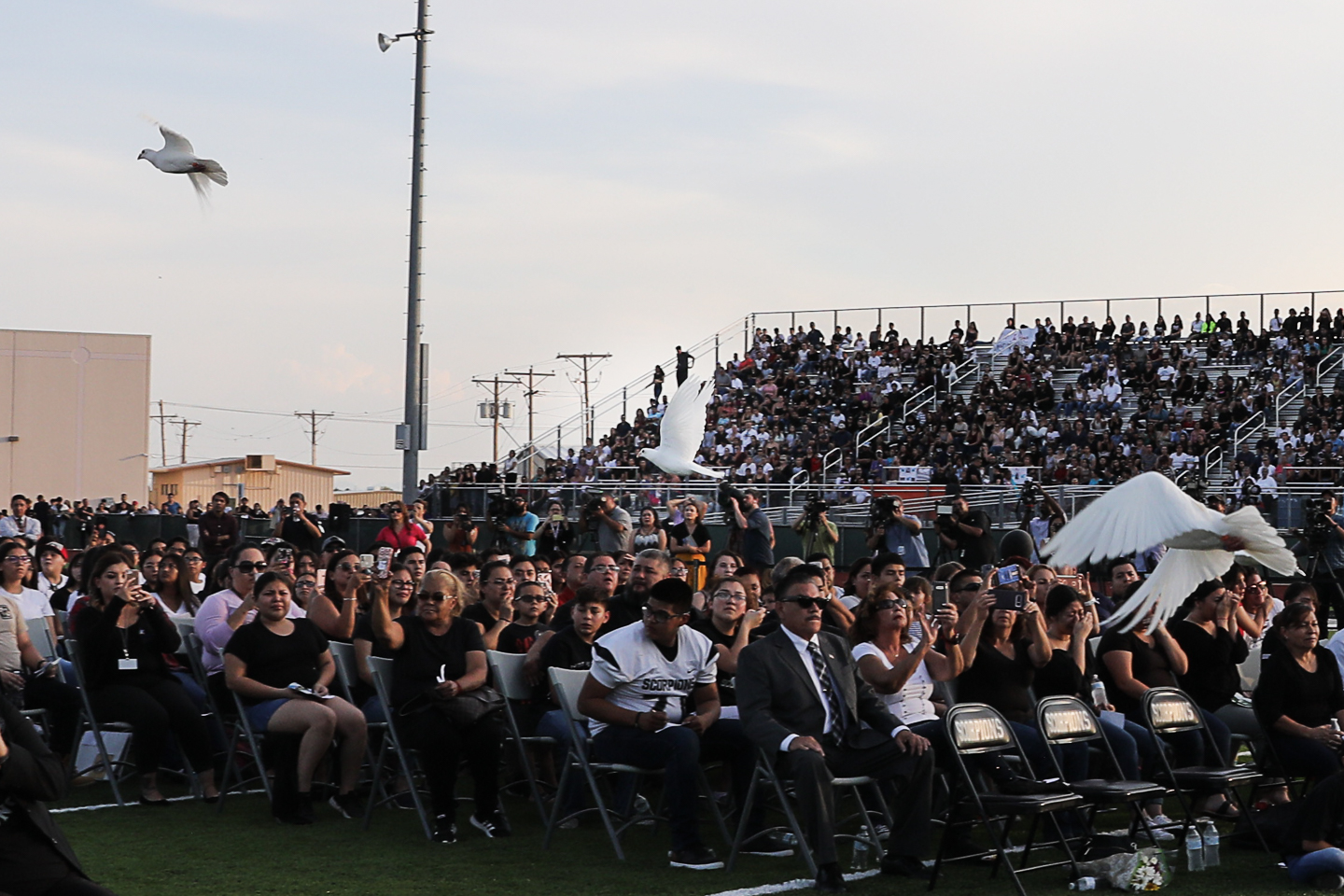 22 white doves were released in honor of the 22 victims.

In these two weeks, I’ve seen many El Pasoans who live in other cities come home to be with their families. It’s as if this act served as a beacon for those who love El Paso to come home, if even for a few days. It’s remarkable how something so tragic can pull a community together so quickly. I think of all the beautiful gestures of love that strangers have shown each other in the past few days—the love El Paso showed for Mr. Antonio Basco who lost his wife and sole companion Margie Reckard in the shooting was beyond words.

Mr. Basco, with no family to call on in El Paso, invited the El Paso community to mourn the loss of his wife Margie with him. The response was overwhelming. Over 3,000 El Pasoans attended her services to show their love and support for Mr. Basco, Margie’s son and grandson who came in from Nebraska to bid her farewell. The love also manifested itself in flowers—so many flowers filled the church with beauty and a sweet floral scent, and those thousand bouquets were later transferred to the makeshift memorial at Wal-Mart. 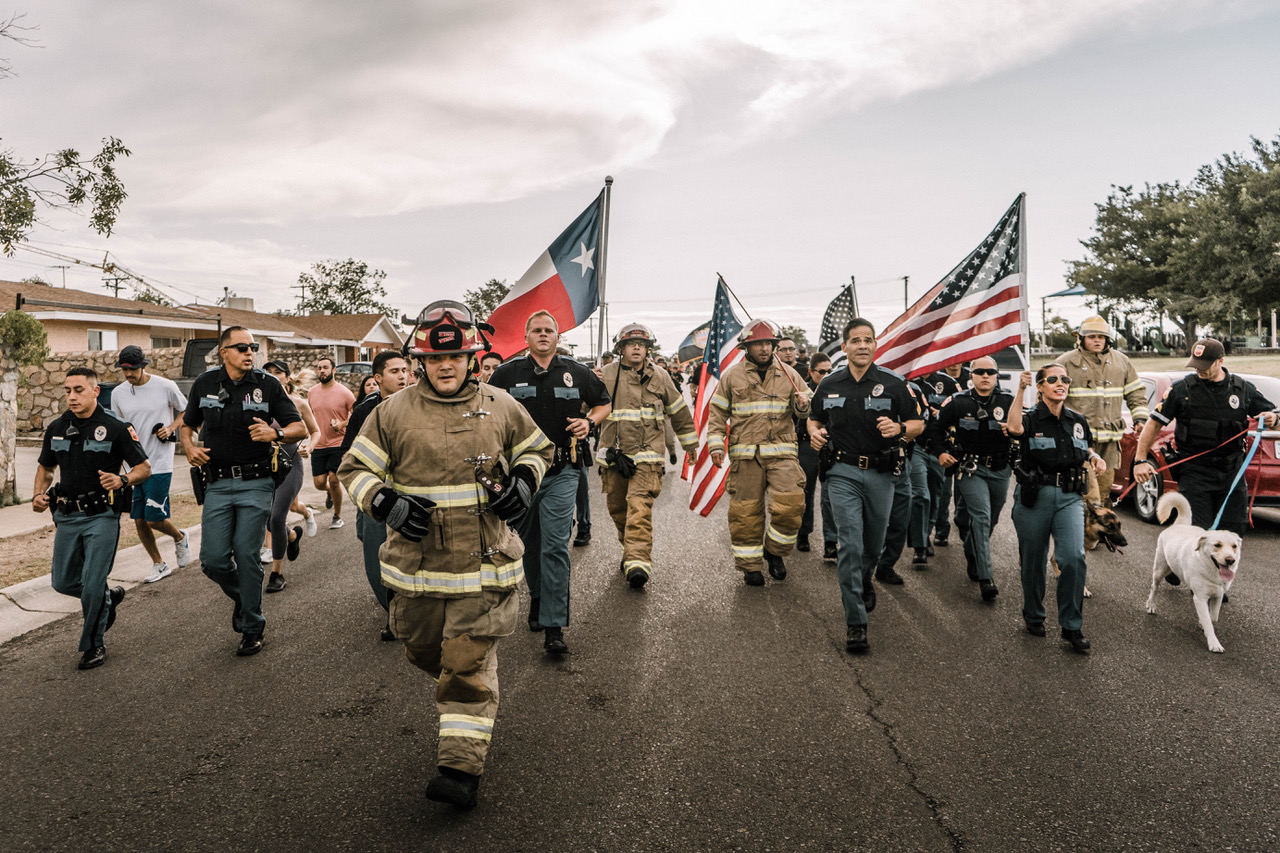 There’s a melancholy and malaise that is palpable in our air. We are a city in mourning, processing what happened to us. I’ve seen it manifest itself in so many ways. We went to work Monday after the shooting and the air was thick, the laughter that is usually there was gone and it was quiet…so quiet.

That week, my sister sent me a text message, saying that she didn’t know what came over her and burst into tears in the middle of a meeting at work. 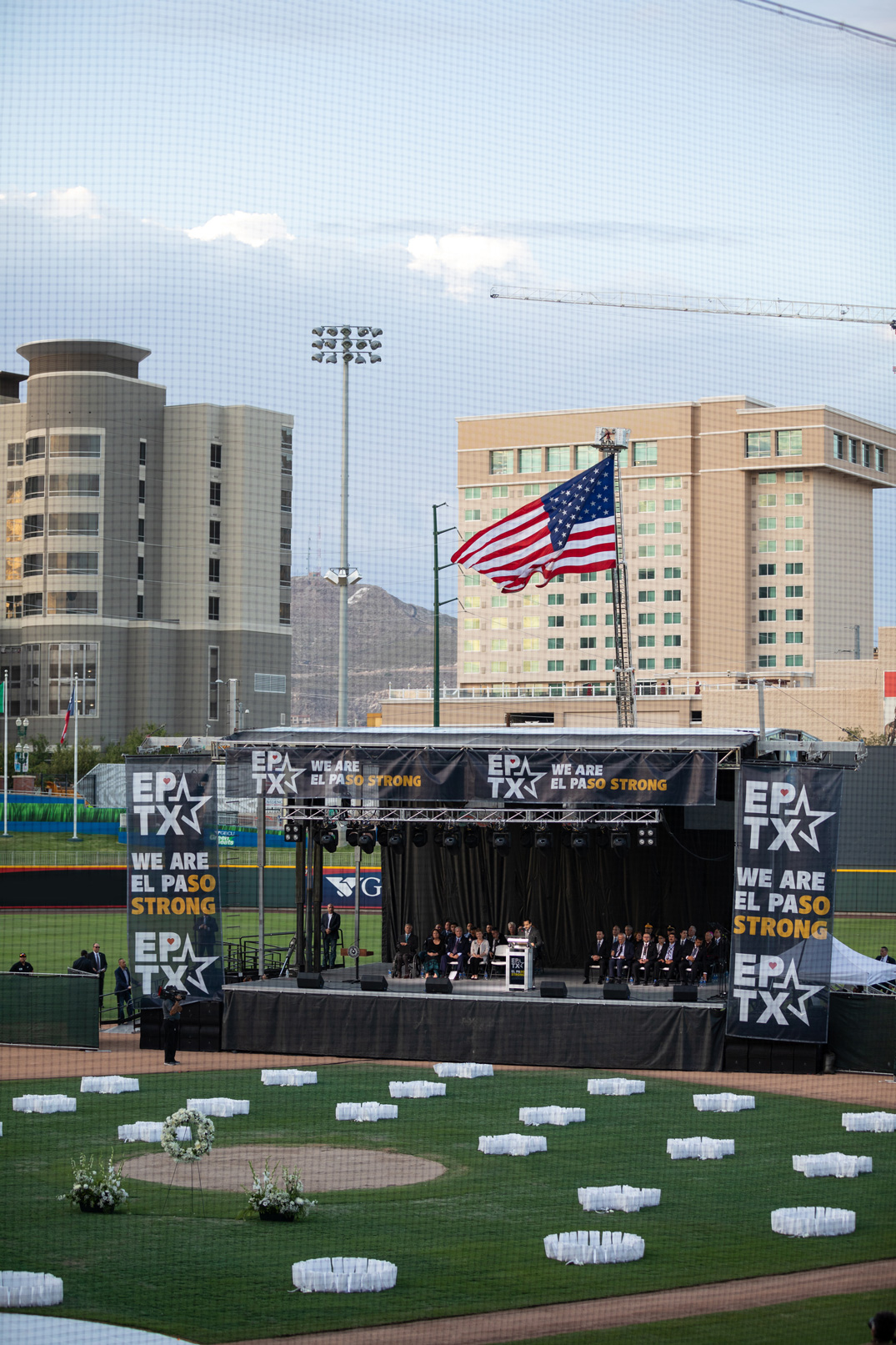 The City of El Paso’s Community Memorial Service to reflect and remember the victims of the mass shooting.

The truth is; we’ve all burst into tears. We’ve all felt the profound sadness that comes from the depths of our souls. We’ve all had trouble sleeping. Those with children have a whole other level of anxiety to deal with for their little ones. My friend Ray shared a heart wrenching story about his four-year-old son Bubba, who took his water gun to Wal-Mart to protect his daddy while they went grocery shopping. How is it possible that we now live in a world where a four-year-old thinks he needs protection to go to the store?

This is no way to live. I’ve been avoiding writing this piece because it hurts. It hurts so much and no matter what I write, it’s not going to be enough. It’s not going to fully express what it feels like to have a tragedy like this happen in our city. So guess what? Like the rest of El Paso, I too am going to rise. I’m going to rise and I’m going to do everything that is humanly possible to make sure this never happens again. We are El Paso Strong. 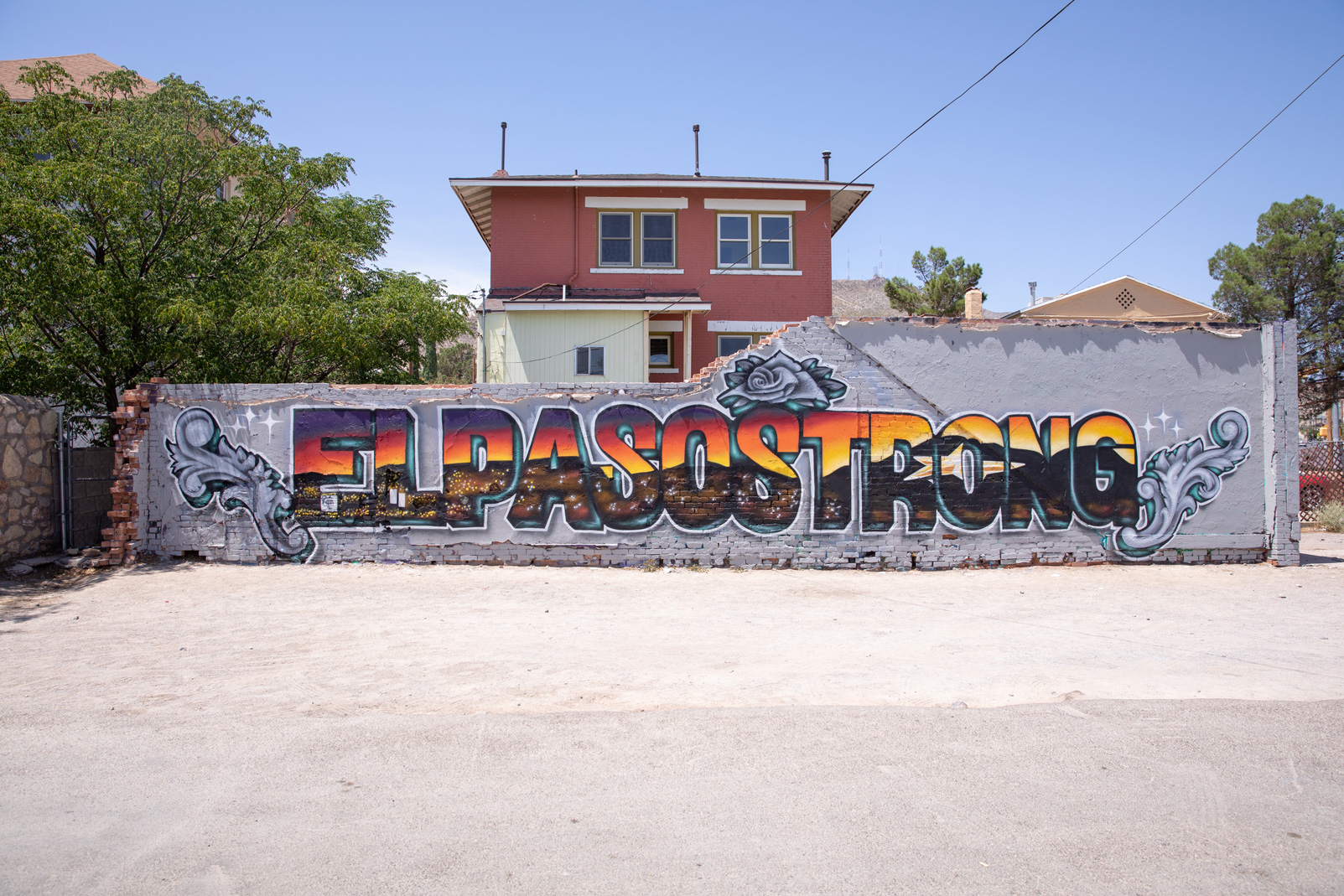