Podium Finish, located downtown at Texas and Ange in a reclaimed automotive shop, is a lot of things.
It’s a full-service bike shop offering repairs and upgrades, gear, clothing and accessories and everything in between. It’s an authorized BMC Switzerland Performance Bikes dealer. It’s an indoor cycle training center. It’s a café and restaurant. Most of all, it’s a place for people to come together. 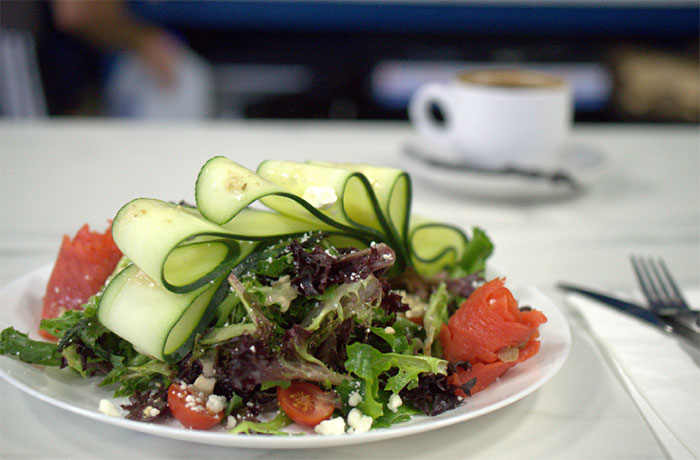 Podium Finish is latest chapter for partners Jo Ann Underwood and Ephraim Vivar, whose backgrounds in sales — he in cars, she in cemetery plots — led them to their careers in real estate, then led to cycling, and to each other.
Ephraim — who may love coffee as much as he does cycling, a fact that becomes clear as the self-professed “coffee addict” pours himself another Café Cubano at 7:30 p.m. — radiates enthusiasm when he talks about cycling, though that could be also be the caffeine. It’s likely both.

Six years ago, in talks to sell a house, two real estate clients of Ephraim’s made him a deal: “‘If we buy a house,’ they said, ‘you have to buy a mountain bike and come ride with us.’ Me, thinking about the commission, said, ‘Deal.’ A couple months later, sure enough, they bought a house so I went and bought myself a mountain bike and went riding with them.”
He hated it.
No fan of the stop-and-fix-it nature of mountain biking, Ephraim instead took his bike to the streets where, in time, he came across a group of guys riding on Edgemere and they started riding together.
A handful of those riders expressed interest in starting a club. Soon enough, that 12-member group had ballooned to 125. That group — EP Cyclists — now boasts upwards of 400 members. 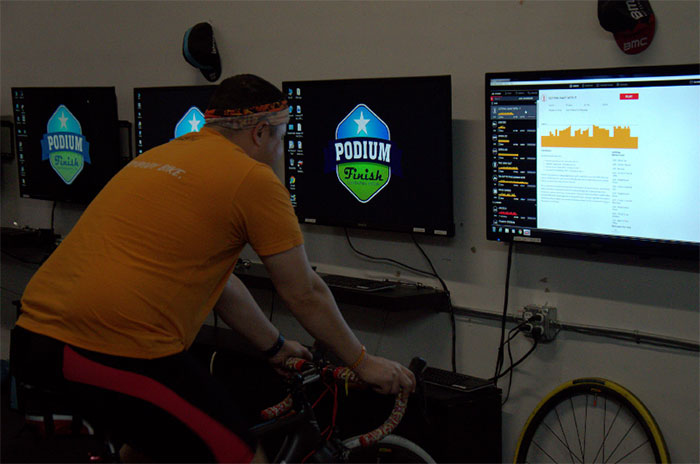 For Ephraim, though, cycling is more than a hobby. In his words, and in Jo’s, it saved his life.
“Six years ago, I bought my first bike, not counting the one I had as a kid,” he said. “For 20-something years I was a party animal. I’m not ashamed to admit that. The bike helped changed my life. I started riding and I was hooked. Then I was riding every other day, Saturdays and Sundays and, guess what? Partying had to wait.”
The bike also led him to Jo.
“When I met the bike, I met Jo Ann the exact same month,” Ephraim said, eyes shining.
When they met, Ephraim was brand new to cycling; Jo wasn’t a cyclist at all.
“She didn’t ride bikes but she became my official, only supporter,” Ephraim said with a laugh. “She would come out to event and support me, drive me to and from events, and most importantly, took pictures.”

Soon, the duo was approached by two local bike shops looking to expand and floated their clients the idea of coupling shop with café. After both declined, Jo and Ephraim went forward with their idea themselves.
They haven’t looked back since; they’ve hardly had time to.
Podium Finish got its start in a much smaller space on Missouri Avenue, but the duo’s big dreams needed space to accommodate them, and in May, they relocated the store to its current home. Its doors officially opened in October, though walk-in customers had already placed bike orders before the tape was off the windows.
It’s already been a whirlwind few months for Podium Finish, but don’t expect things to slow down anytime soon. Come January, Jo said they plan to apply for a beer and wine license and expand to a full-service kitchen. Its current café menu — and soon-to-be full-service menu — was crafted and prepared by Chef Luis Hernandez, who honed his skills over years spent at some of El Paso’s finest restaurants, Café Central and Garufa among them. 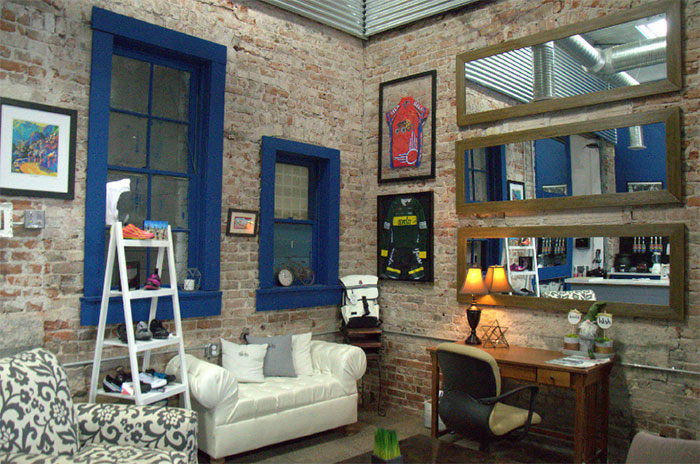 For now, the menu features coffee, cappuccinos and lattes, smoothies, salads, flatbreads, sandwiches and wraps and a handful of delectable desserts, along with daily specials — pearl-sugar French toast, from-scratch oatmeal banana pancakes, everything bagels piled high with toppings.
Podium Finish’s bicycle technician Mosco Garcia holds the lion’s share of Shimano’s industry-standard certifications and, in the coming months, will complete the set, making him the only Shimano-certified mechanic in the region.
Its cycle training facility boasts six machines, each virtual-reality enabled, allowing cyclists to train indoors, setting goals, keeping an eye on health and training stats, even holding virtual “races” against other cyclists the world over.
The Google-licensed maps even allow cyclists to train for races in virtual versions of real cities, free from traffic, stops, inclement weather — everything that gets in the way of setting and surpassing goals.

In Jo’s eyes, Podium Finish is set to be a one-stop shop for busy cyclists and coffee lovers alike. 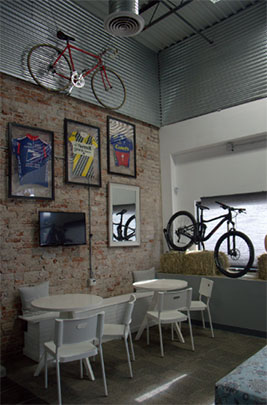 “You can come in first thing in the morning, have a protein shake, change, punch in on the trainer, shower, change, and I’ll have your coffee and lunch ready for you to take with you,” she said.
El Paso is taking note, and Podium Finish is already bustling. Regulars — among them TV personalities, downtown employees, government officials from the both sides of the border and, of course, plenty of cyclists — come in and out, exchanging laughs and jokes, in both English and Spanish.
As Jo said, “We’ve met so many wonderful people along this journey … I think it’s through coffee, Ephraim thinks it’s through bikes.”
I think they’re both right.